Since the first human beings started walking around the world, we can consider that there were people gradually “projectizing” the way we do things. Maybe not exactly as we currently understand Project Management and surely using a lot less techniques, but there were certainly projects and project managers.

A good example comes from 2650 B.C., during the construction of the first Egyptian Pyramid. At that time, King Djoser, the customer and sponsor, required his architects to build this particular building, which is said that by many reasons it might be expected to provide him a kind of smoother journey to his afterlife as well as some other benefits. 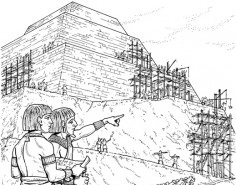 We can consider that it was a major programme, since it intended to contribute directly to one or more of King Djoser’s strategic objectives. Although it was 4700 years ago, they already knew that this kind of programme needs someone fully accountable for the results. Maybe they were even more accountable than today, once those programme managers could lose their lives in case of failure. Then, they chose the vizier Imhotep for this task.

After gathered the most relevant stakeholders’ expectations, defined expected benefits and created the KPIs for further control, Imhotep and his architects (the project team) decided to build six Mastabas, one on top of the other (Mastabas were Egyptian burial chambers). They probably “hired” thousands of slaves and executed this challenging programme. At the end, they had built a 197-foot-high (60 meters) Step Pyramid as part of a 37 acres (15 hectares) complex. Even for today’s figures, we need to recognize it as a very large and complex programme.

This programme was considered a success, since it delivered the output expected by the King and it also is considered as the inspiration for all the other Egyptian Pyramids. The title of “chief of sculptors” has been awarded by the King to the programme manager, Imhotep, which has his name carved on one of the King’s statues.

However, analysing it by today’s perspective someone can say that the most important KPI was hardly measurable, since nobody can say how or even whether the King reached his afterlife. Moreover, that Pyramid had not a perfect shape, which required a lot of effort from the next generations in order to build a smooth sided pyramid. Although we see this programme as a unique benchmark, we cannot say that it is a total success, can we?

Therefore, based on the evolution of project management throughout the centuries, this blog will discuss themes related to project management (including programme, portfolio, benefits, governance, etc.) from the perspective that they are constantly evolving. It means that we are always learning, discovering and creating.

The next posts will continue this history, by moving its attention into more modern pyramids and programmes…

More info about the Pyramid of Djoser can be found on http://en.wikipedia.org/wiki/Pyramid_of_Djoser

We use cookies on our website to give you the most relevant experience by remembering your preferences and repeat visits. By clicking “Accept All”, you consent to the use of ALL the cookies. However, you may visit "Cookie Settings" to provide a controlled consent.
Cookie SettingsAccept All
Manage consent

This website uses cookies to improve your experience while you navigate through the website. Out of these cookies, the cookies that are categorized as necessary are stored on your browser as they are essential for the working of basic functionalities of the website. We also use third-party cookies that help us analyze and understand how you use this website. These cookies will be stored in your browser only with your consent. You also have the option to opt-out of these cookies. But opting out of some of these cookies may have an effect on your browsing experience.
Necessary Always Enabled
Necessary cookies are absolutely essential for the website to function properly. This category only includes cookies that ensures basic functionalities and security features of the website. These cookies do not store any personal information.
Non-necessary
Any cookies that may not be particularly necessary for the website to function and is used specifically to collect user personal data via analytics, ads, other embedded contents are termed as non-necessary cookies. It is mandatory to procure user consent prior to running these cookies on your website.
SAVE & ACCEPT